The COVID-19 pandemic, caused by the novel SARS-CoV-2 virus of the Corona-virus family, poses an immediate threat to humanity. An urgent challenge is to understand the underlying biology of how the SARS-CoV-2 virus works when it infects the body.

To combat the virus with effective treatments, we must first learn the defining and driving features of SARS-CoV-2 infection. A recent study by Blanco-Melo et al. (Cell, 2020) found that SARS-CoV-2 infection is characterized by unusual low innate antiviral defenses and high pro-inflammatory response. Although the study bridges an important gap in our understanding of the virus’ pathogenicity, additional insight can be gained from a more in-depth identification and classification of molecular systems affected by the viral infections. Furthermore, investigating the impact at the systems level, allows for evaluation of drug target candidates in the context of the biological networks they are affecting.

Here, we sought to re-analyze the Blanco-Melo et al. data with the aim of gaining new therapeutic insights and targets for COVID-19, by identifying ‘secondary cellular responses’ outside of the primary immune response. We use a network approach based on physical protein-protein interactions (inBio Map™) to find biological systems regulated as a whole in response to SARS-CoV-2 infection. We show that by going beyond a limited list of individually significantly regulated genes, we can uncover new insights and drug target candidates for COVID-19.

Highlights from this work

Each network was inspected in detail, and the dominant molecular biology in each network was assessed via Gene Ontology overrepresentation analysis using inBio Discover™. The biologies represented in the networks are very well in agreement with how SARS-CoV-2 and other coronaviruses are believed to affect the infected cells (disruption of cell cycle regulation (NW1, NW4, NW6, NW10), including mechanisms linked to DNA repair (NW2, NW3, NW5, NW8), the formation of new virus particles via vesicle formation in the Golgi apparatus (NW8, NW13) and effect on the host’s RNA processing systems (NW7, NW12). (We also repeated the analysis for the top 25 networks, and the same classes of biology were represented in this extended set as well, indicating further robustness of the findings.)

We further annotated the networks with information about direct virus-to-host protein-protein interactions as well as known drug targets. For each main category of biological function, we have highlighted an example below, with an interesting pattern of virus-host interactions and/or drug targets.

We merged networks 1 through 13 into a combined network of 351 genes. We compared our network to the list of 120 differentially expressed genes (DEGs, FDR < 5%) reported by Blanco-Melo et al. Only 3 genes overlap between the two gene sets, demonstrating that individually DEGs and biological networks regulated as a whole, are two complementary approaches to studying gene regulation. Our networks cover a more expansive set of biological systems and include more than two times the number of drug target candidates compared to the DEG gene set. In summary, network analysis is a powerful and complementary approach to derive new and deeper biological insights from transcriptomic data.

This network is closely linked to the process of formation of viral particles in the Golgi apparatus. Not only is the system significantly regulated as a whole at the transcriptional level (the individual genes/proteins are weakly regulated), but it also contains key virus-host interactions (see table below) plausibly involved in the process of highjacking the Golgi as a virus particle factory. Furthermore, among the drug targets present in the network, one of them (CTSC) currently has an associated drug in phase 2 clinical trials specifically for the treatment of COVID-19 (ref.), which further strengthens the link from this biological system to COVID-19. 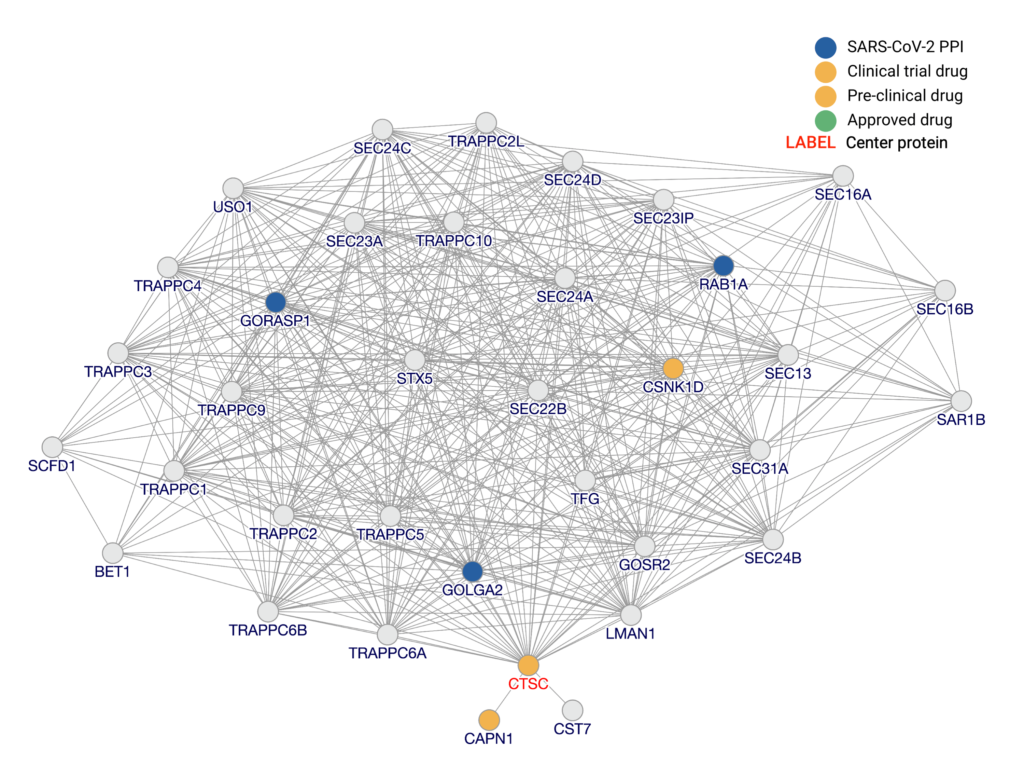 This network is linked to the virus process of interfering with host gene expression. It is already known that other coronaviruses, including SARS-CoV, interfere with the host’s transcriptional system to enhance virus transcription/replication, via interaction with the helicase DDX1 (ref.). DDX1 is part of a complex containing DDX1, DHX36, TICAM1 and DDX21, the latter of which is found in this network. Furthermore, DDX21 has been shown to be the target of a virus/host interaction (see table below). 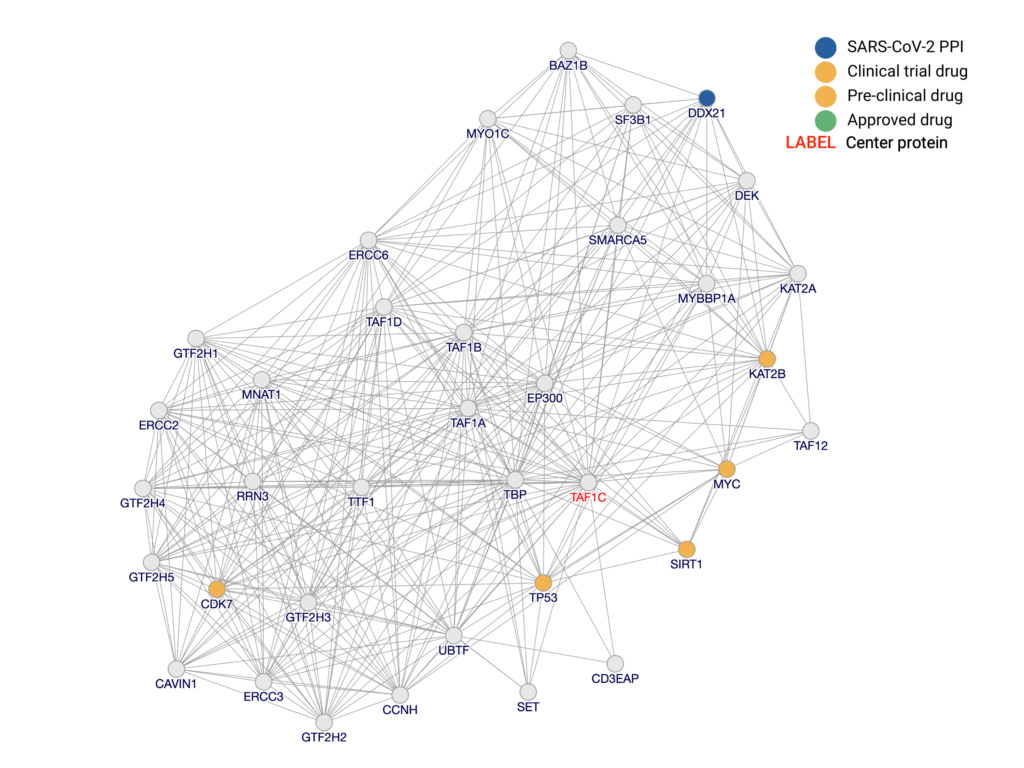 This network captures part of the response to cell cycle deregulation by the virus. This effect is well known from other viruses (including SARS-CoV, where it is mediated via an interaction with nsp3b) as well as SARS-CoV2 (where it is mediated via interaction from protein 7a). A number of points in the cell cycle are commonly targeted by viruses: G1/S checkpoint, G2/M checkpoint, mitotic exit, G0/G1 checkpoint. SARS-CoV-2 is currently thought to affect the host cell cycle by dysregulation of the G0/G1 transition potentially via interference with the cyclin D3/pRb pathway. Any dysregulation of the cell cycle in a differential gene expression study, will naturally have an effect on multiple cell cycle-related systems, which is what we observe (see network overview list). 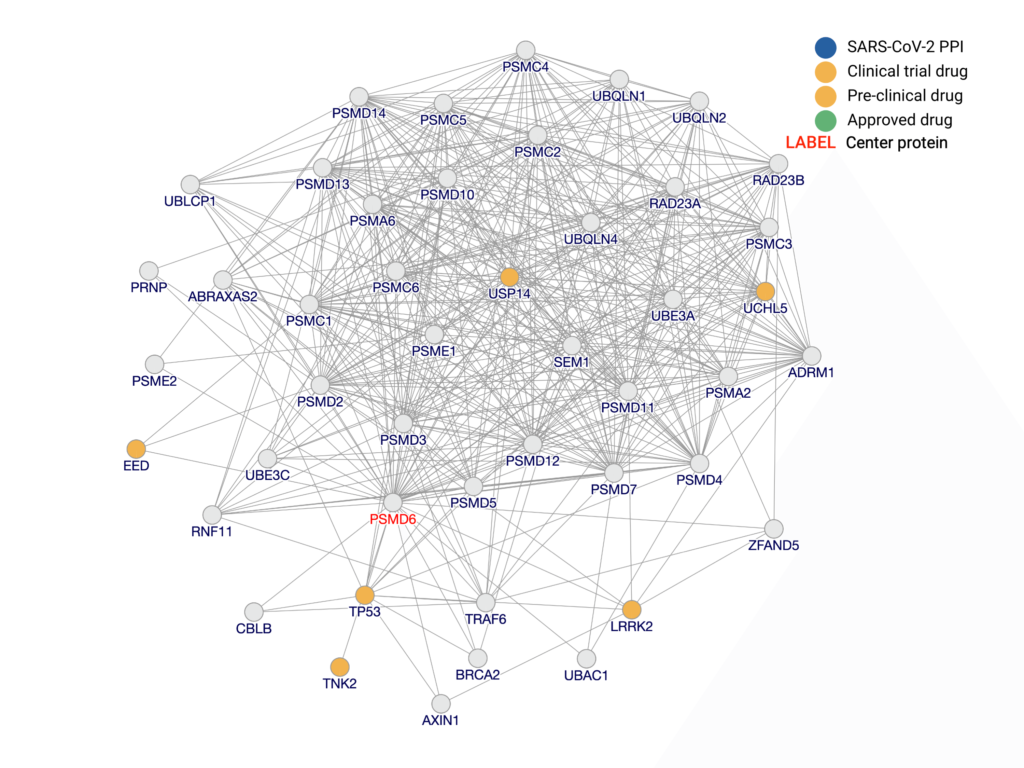 The final network we are showcasing in full detail is linked to DNA repair. It should be noted that since DNA repair is so closely linked to the S phase in cell cycle, it is difficult to completely separate regulation of these two biological systems in a differential gene expression study. However, DNA repair (including DS breaks) has previously been linked to SARS-CoV and it is plausible to also play a role in SARS-CoV-2 infection. From our analysis, multiple networks related to aspects of DNA repair (and the cell cycle S phase, by proxy) have been identified (see network overview list). 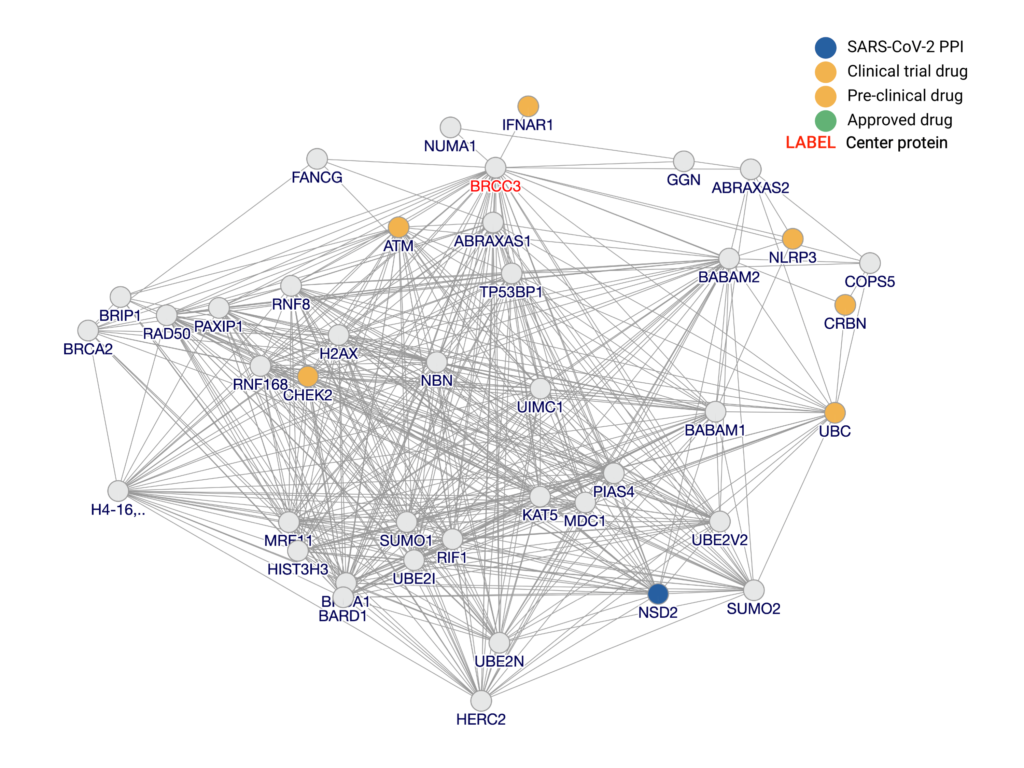 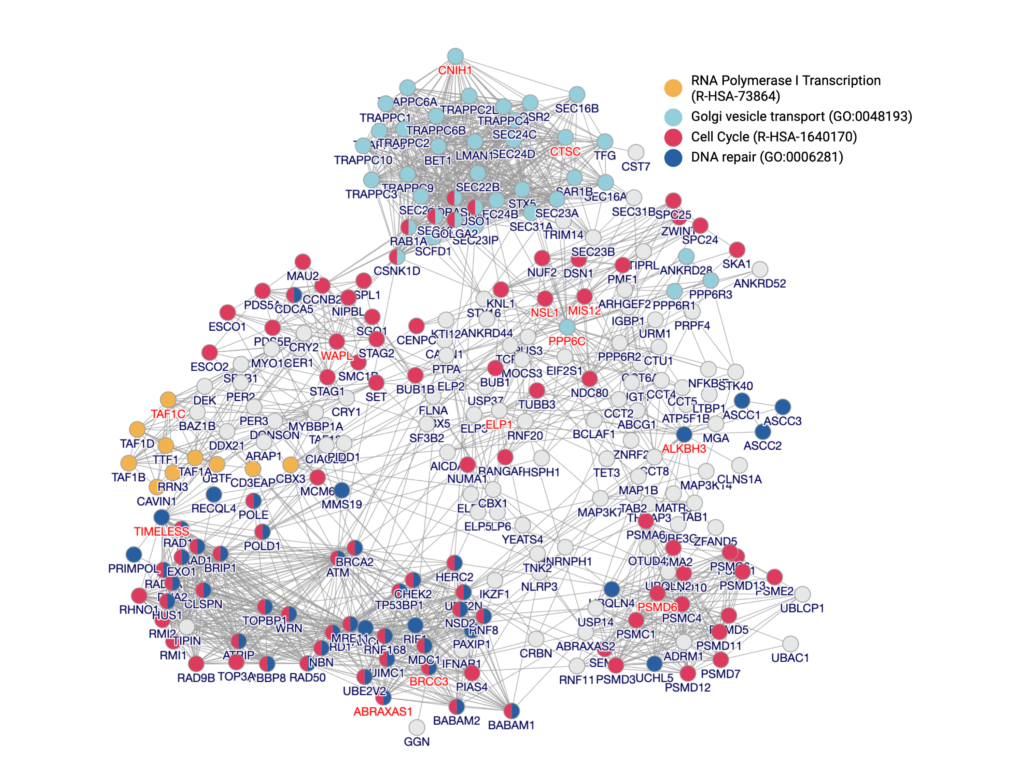 We merged networks 1-13 into a single network. This combined network contains several drug targets (6 targets with approved drugs and 29 with drugs in clinical trials) as well as 5 virus-host interactions. When overlaid with functional pathway annotations (Gene Ontology and Reactome), we see the four overall biological functions as sub-networks within the merged network. This is a strong example of how proteins that share biological functions cluster together in biological networks, and how network biology can thus strengthen interpretation and insights from transcriptional data.

We elected to focus this study on networks of limited size in order to get a more clear separation of overlapping biological systems. Focusing on smaller networks also allowed us to do a more in-depth characterization of the significantly regulated networks. The downside of restricting the network size is that we do not cover the full spectrum of biological networks implicated in the SARS-CoV-2 virus response.

We used protein-protein interaction networks (inBio Map™) to perform a system-level evaluation of genome-wide transcriptomics data to uncover new insights and targets for COVID-19. Our work implicates vesicle transport, cell cycle, DNA repair and transcriptional biology (see below figure) as part of the host’s response to SARS-CoV-2 infection. Our networks cover a more expansive set of biological systems and include more than two times the number of drug target candidates compared to the DEGs reported by Blanco-Melo et al. In summary, network analysis is a powerful approach to derive new, deeper and actionable biological insights from transcriptomic data. 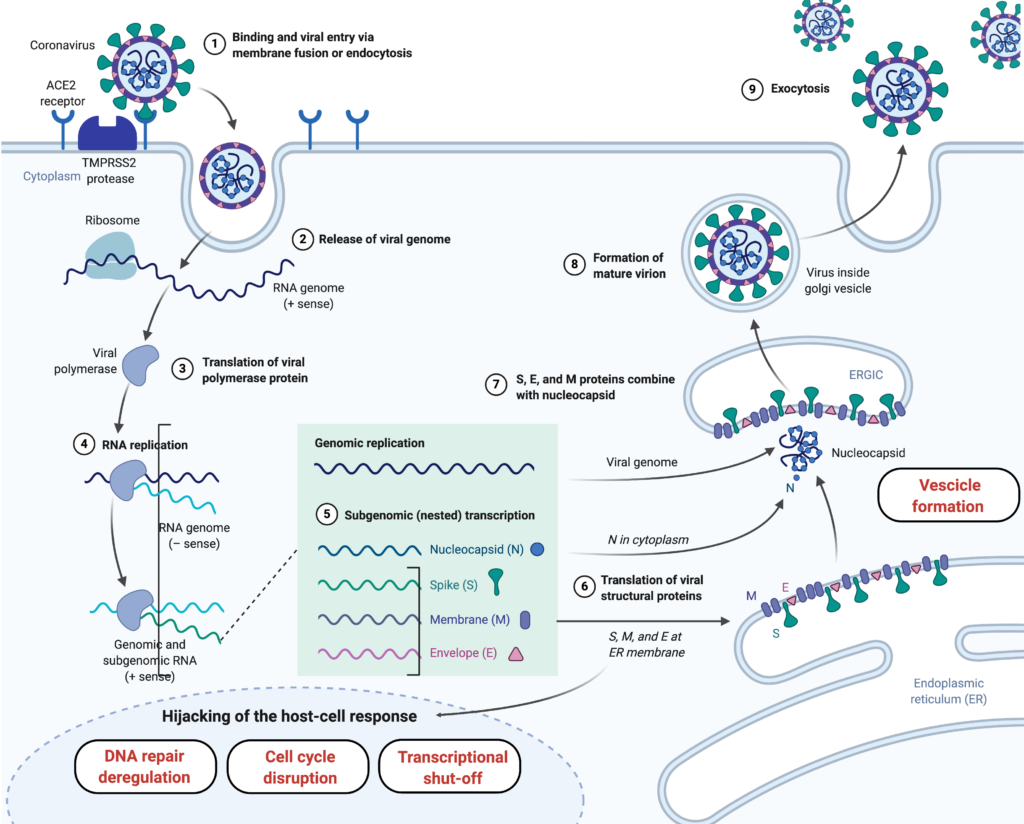 We obtained differential expression summary statistics of SARS-CoV-2 host infection from Blanco-Melo et al. (now published in Cell, 2020). Briefly, these data were generated as follows: human lung alveolar cells (A549) were infected with SARS-CoV-2 and RNA-seq libraries were prepared and sequenced, and differential expression analysis against control (mock infected A549 cells) was performed using DESeq2. The authors reported 120 differentially expressed genes (FDR < 5%) of which more than 80% were up-regulated.

We used the SystemSignificance tool (that is part of our inBio Command™) to identify significantly regulated COVID-19 networks. SystemSignificance uses omics data (in this case transcriptomics) and permutation analysis to assess the evidence of transcriptional regulation for neighborhoods of proteins. A key strength of this approach is, that by pooling information in neighborhoods of proteins, we can increase the robustness and amplify the biological signal from the differential expression analysis. The output of SystemSignificance is a p-value measuring the significance of (transcriptional) regulation for a given protein’s neighborhood.
If you would like to learn more about inBio Command™ or our software modules, please contact us.

The resulting networks where filtered based on size and significance:

In total we retained 13 networks.

We annotated the networks with drug target data and virus-host protein-protein interactions (PPI). We obtained drug targets and drug data from the Therapeutic Target Database. For virus-host PPIs we downloaded the BioGRID database COVID-19 interaction release. The release contains 353 human-SARS-CoV-2 interactions from 14 studies, incl. the landmark study by Gordon et al. (2020, Nature). See the below section section for an overview of all data resources used.

Get in touch with us to learn more about these results and algorithms, and how Intomics can help you advance your biomedical or COVID-19 research.

Contact Us
We offer access to individual COVID-19 network files (.xgmml format) upon request.
Terms of use: these results and networks are made freely available to enable COVID-19 research in the biomedical and public health research communities. The networks are made available via inBio Discover™ , which is a free to use service for searching and exploring inBio Map™ PPI networks. Access to advanced features and download of the full underlying PPI database, requires a commercial license. Read more here.

A new indication for an existing drug